Humminbird Helix 5 Reviews: Does This Fish Finder Set The Bar?

Fish finding technology is always advancing, companies are doing more and more to make it easier to find fish, and the end result always trickles down to us in the form of dollar signs. The point of our Humminbird Helix 5 reviews is to look at a standard fish finder that doesn’t come with a million bells and whistles but gets the job done.

Reliability, performance, accuracy, and simplicity are important to me and I don’t always think we need to get so fancy with all these different features. The goal of a fish finder is to find fish and the Humminbird Helix 5 does a nice job at it.

After testing countless fish finders, spending years on the water, and hooking plenty of bass, we’ve decided that this device was worth a full review. Stick around and see if you find anything you like! If you’re reading this right now wishing that you could find a reliable fish finder that really just helps you find fish. It’s simple to use, easy to set up, and accurate, this is the one you want. You’re not going to get an advanced GPS system, you’re not getting a ton of storage to chart up every lake in the state, and you’re not getting a 10-inch HD screen.

What you are getting is a device that won’t break down on you, it’ll hold up over time, it’ll provide accurate readings, and it will help you spend less time tracking fish and more time catching them. All our Humminbird Helix reviews have things that separate them and this one is all about simplicity.

Humminbird Helix 5 Reviews: The Best and The Worst

Now let’s go into detail about everything you need to know regarding this fish finder. As I’ve said, it’s designed to be simple, straightforward, and affordable. As a result, you’re not getting a lot of the premium features you might find in the Humminbird Helix 7 or Helix 9. That’s not always a bad thing though.

If you’ve read any of our other fish finder reviews, you’ll realize that the name of the unit refers to the size of the screen. So, a Humminbird Helix 5 has a five-inch screen which is the smallest of their units. Most anglers would prefer to have a seven or nine-inch screen but a smaller screen does have its place in the fishing world.

If you’re looking for the best fish finder for kayak fishing or a small jon boat, the five-inch display won’t get in your way and it’s easy to mount portably as well. That said, you’re obviously sacrificing some ease of use in this area because you’ll have a harder time reading it and being able to quickly identify what’s coming up as you’re moving throughout the water.

The screen itself offers 480×800 pixel resolution with a 256-color display. At this point, if we saw anything less of Humminbird we would be disappointed. All of their products have a great color display with plenty of vibrant variations in contour to help you identify fish and structure.

It also has a backlight which is something we weren’t expecting for a fish finder in this price range. The light is nice because it helps reduce the amount of glare on the screen as a result of bright sunlight shining down on it.

While the screen is small, there’s not much else that we could complain about. All the same features and components of the premium models are available in a smaller package with the Humminbird Helix 5.

Depending on what model you choose, it will determine what type of sonar you get. Most of them come with CHIRP and DualBeam sonar. CHIRP is the technology that is used to create the images. It sends a consistent flow of waves down into the water and they bounce off anything they hit and that’s what determines that something is there.

From that point, it’s up to you to determine what that is. It could be a rock or it could be the catch of a lifetime.

DualBeam zeros in on the clarity of the image for down and side imaging. You have control over what type of image you create based on how wide you spread out your sonar waves. If you are scanning a large area of water and aren’t too worried about a specific location, you can use the 455 kHz wide beam sonar and cover a lot of water in a short amount of time.

If you feel like there is a particular area that you want to focus on you can zero in on that area with the 800 kHz narrow beam and get the clearest image possible.

These features are available on pretty much all the Humminbird Helix fish finders. Overall, the accuracy of the sonar is state-of-the-art as we would expect from this premium brand. It also offers 2.5-inch target separation which is a fancy way of saying they guarantee accuracy in inches.

If we take a look at a Humminbird Helix 5 SI review, the SI refers to side imaging. This is the only model of the Helix 5 that comes with side imaging and when you get SI you almost always get down imaging as well.

Side imaging allows you to scan the water around the boat which is great if you’re trying to see what fish are closer to the shoreline than you can get. This imaging is never as accurate as down imaging and when you’re dealing with a small five-inch screen, that doesn’t make it any better. SI fish finders are also more expensive but this one is worth the added expense.

If you decide to go with the down imaging fish finder you’ll get a highly reliable unit that provides imaging of everything that is happening underneath you up to a certain depth. One of the biggest complaints I have about this fish finder is how difficult they make it to find information about depths and ranges for the sonar.

Thankfully, we found it for you. It has a max depth of up to 1,500 feet but we would never anticipate it would be accurate at that depth. Most fish finders start losing accuracy dramatically after 250 feet and we expect the same for this budget-friendly model.

The GPS in the Humminbird Helix 5 is pretty basic and the unit doesn’t come with a ton of storage so you’re limited with what you can do. It gives you up to 2,500 waypoints with 45 routes and you can sync it with AutoChart Live Navionics but all of that comes with an additional price if you want to download maps and the unit will fill up pretty quickly as well.

There are a lot of additional things you can do like LakeMaster which allows you to use satellite imaging to get an idea of what type of vegetation is in the water so you can determine some of the best fishing spots. This is a great feature but it also comes at a premium cost and you might want to save something like that for when you get a unit with a bigger screen.

Here are some of the features that stand out to us the most about this fish finder. You’ll find all of these features in the premium models as well.

One of the most notable features of the Humminbird brand is their SwitchFire feature which allows you to customize how you want to use the sonar technology. As we mentioned above, you can zero in on a target and get a clear picture if you know exactly where you want to cast or spread it out wide if you want a larger view.

The SwitchFire feature makes things even simpler by not requiring users to play around with frequencies if they’re not tech-savvy. It’s all based on frequency and this feature uses two modes; one being max and the other clear. Max mode allows you to spread the sonar wide so you can scan a large area of water. Clear mode focuses on specific targets when you think you found an area where you want to drop a line.

It also uses a color-coded system where everything is color-coded based on how close they are to you. Orange means close, blue means far away. These settings are fully customizable if you’re familiar with the technology as well. If you’re not, you can leave them alone and use it as-is.

For the SmartStrike feature your GPS collects data based on what season it is, where you’re fishing, what the weather is like, and what type of fish are typically found in the water. It’ll then analyze all of these conditions to help you identify the best area on the lake to fish.

Of course, for this to work your lake needs to be available with chartplotting technology and if it’s not you’ll likely have to pay a premium price to get it on there or map it out yourself. It’s an advanced feature so it also requires you to possess a little bit of knowledge on how to use the technology.

The one complaint I have is that I wouldn’t like to do this on such a small screen. Being that it’s only five-inches wide, it’ll be hard to get an accurate depiction of where the device is actually telling you to go. Nonetheless, still a cool feature for a fish finder of this price range.

The goal of these Humminbird Helix 5 reviews is to help you understand that even though this is a basic model, it doesn’t have only basic features. It’s even a little strange that Humminbird pretty much keeps everything the same but only changes the size of the screen. Where the differences in features come is when you’re shopping between the SI, DI, or basic FishID technology models.

Overall, if you’re looking to save a few bucks and don’t mind a smaller screen, this is the way to go. Humminbird is my favorite brand when compared to Lowrance, Garmin, or any of the other manufacturers. Plus, it’s also a solid portable fish finder if you need something you can store and travel with.

No matter what choice you make, I hope this guide helps you. Good luck out there! 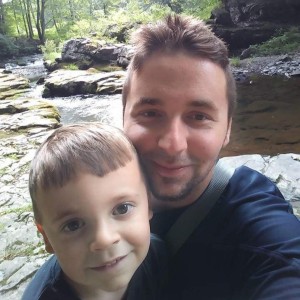 Coty Perry
For Coty, he didn't love bass fishing at first cast. It took a few (thousand) throws for him to become obsessed with mastering every possible fishing style, technique, and lure. As a third-generation angler, he as a plethora of knowledge and experience on the water and loves sharing what he knows. How to Cast a Spinning Reel Like a Pro: The KISS Method